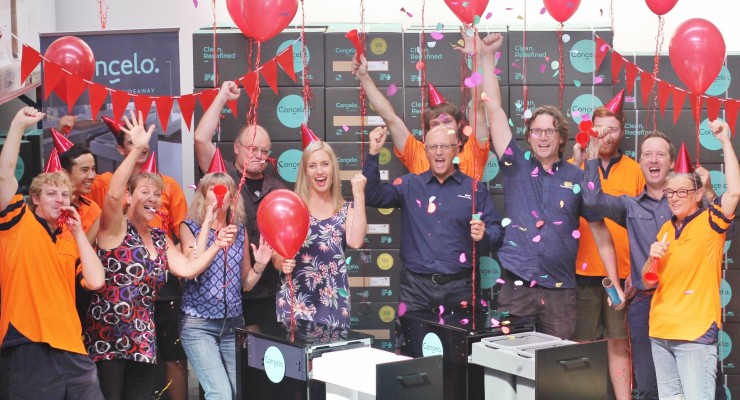 Concelo by Hideaway was today announced as the winner of a prestigious international Red Dot design award. The New Zealand-designed and manufactured Concelo bin was one of more than 5,500 entries submitted from 55 countries for the highly-regarded international design competition based in Essen, Germany. Entries are judged by an international jury panel of 40 experts who only award the sought-after Red Dot seal of quality to products that feature an outstanding design. Past jurors include noted shoe designer Jimmy Choo.

The recognition for Hideaway Bins puts it in good company - other notable New Zealand winners have included Air New Zealand for their SkyCouch design and Fisher & Paykel for their Gas on Glass cooktop and its 60cm Built-In oven. International brands who have received Red Dot awards include Apple, Bulgari, Porsche, Volkswagen, Montblanc, Sony and 3M.

Hideaway Bins, run by daughter and father team Jamie and Allen Bertelsen, won a coveted Red Dot Award in the Product Design category for household appliances and household accessories.  Jamie says the goal was to design the best bin possible for the home owner. “We set about this task after applying for and receiving a Callaghan Innovation grant towards research and development costs. It took seven years of research, development and testing but the result is a paradigm shift for a kitchen appliance that is used 20 to 30 times a day on average.”

The company’s investment in R&D has been a crucial part of their success. “We couldn’t have made this fabulous design without the hard work and commitment of our small R&D team. We also used a small focus group of cabinet makers and kitchen designers who gave their time to provide feedback on our early designs. Dad and I accept this award on behalf of our hardworking team and all the people who gave their time to help us turn this idea into a reality. We believe Concelo will ultimately change the way the kitchen design industry will look at rubbish management in the kitchen - a bucket in a drawer will no longer be good enough, as homeowners are far more aware of the need to deal with waste in a smart way,” she says.

Concelo is an integrated kitchen waste solution for rubbish and recycling that is clean in both its design and functionality. It exceeds the basic requirements of looking and running like a kitchen drawer, by considering the homeowner’s needs and requirements. Above all, Concelo was designed to overcome common issues – including grime and odours - associated with the most-used but least-thought-about kitchen appliance. 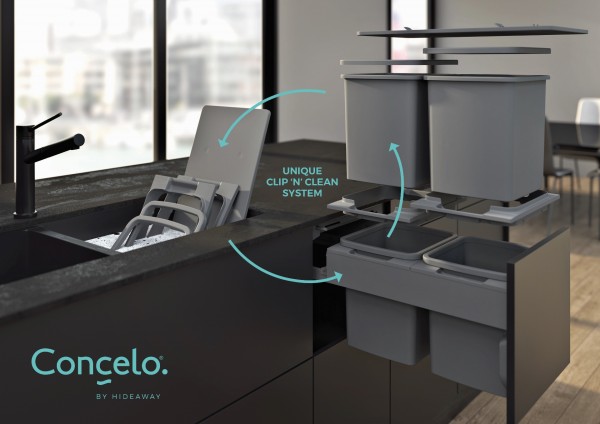 A key feature of the bin’s award-winning design is its self-closing Active Lid, which is hidden from sight inside the cabinet, helping to control odours. The lid is a game-changer as it is now a true hands-free operation meaning the lid is synchronised with the opening and closing of the bin. The lid is cleverly designed and can be removed simply for cleaning with the push of a button!

The clever Clip ’n’ Clean trays, buckets and liner holders are made from stain-resistant polypropylene. They can be removed effortlessly for cleaning and clip back into position in seconds, eliminating potential dirt traps in difficult spaces.

Concelo boasts specially-designed and customised smooth over-extension synchronised runners. Concelo is the first premium waste bin that integrates concealed runners into its design, making it possible for the bin to be mounted at bench height for easy use for the homeowner (no more bending inside cupboards),  whilst allowing the back bucket to be removed independent of the front bucket.

The Red Dot Award ceremony takes place in July this year at the Essen opera house in front of 1,200 international guests.  Winning Red Dot award products will be displayed in the Red Dot museum in Essen for one year.